To create art is to indulge in the freedom of expression.  There are so many places in the world where you simply cannot express yourself the way you want to, with fear of death and/or imprisonment keeping the citizens in line. Personally, I feel rather lucky to be born in a country where I have the freedom to say, “I like this”, or “I dislike that”, as well as the freedom to create pretty much anything a person can think of—from a large bronze sculpture of King Kong doing the mambo with Godzilla, to a small painting of a random political leader dressed up in the rather unflattering appearance of a rodeo clown.

One of the things that I appreciate most about art is that there are so many mediums, and it’s okay to enjoy different styles for each one. It’s okay to like abstract painting but also to like incredibly realistic sculptures. My point is that a person doesn’t need to limit themselves to just one form of art, or just one particular style. We have the freedom to not limit ourselves to what others say we should or should not like. I personally love how someone can create an incredibly realistic image simply by drawing or painting it, a scene that might not even existed in reality.  At the same time, I love how a person can break the world around them into the most basic forms and colors, yet somehow preserve the concept of what the image originally was.

With three-dimensional artwork, both sculpture and ceramics, I absolutely love the idea of abstraction and distortion: to take a familiar person, place, or thing and make it look completely alien, but perhaps leaving a few “vestigial limbs” to hint at what it once was. It’s like an echo, or a rippled surface of a pond, a suggestion to what something once was, and a memory worth saving. I love the way the lines bend and twist, further distorting the piece until it looks like something the world has never seen before. Or, perhaps it looks almost normal, until you see some small thing that exists where it shouldn’t; in that small bit of abnormality, I find beauty. In that break from the mundane, I feel a sense of freedom: freedom to exist as you are, freedom to be who you are, and the freedom to pursue that which you desire. That, in my opinion, is the reason why I love art so much, and why it is so appealing to me. 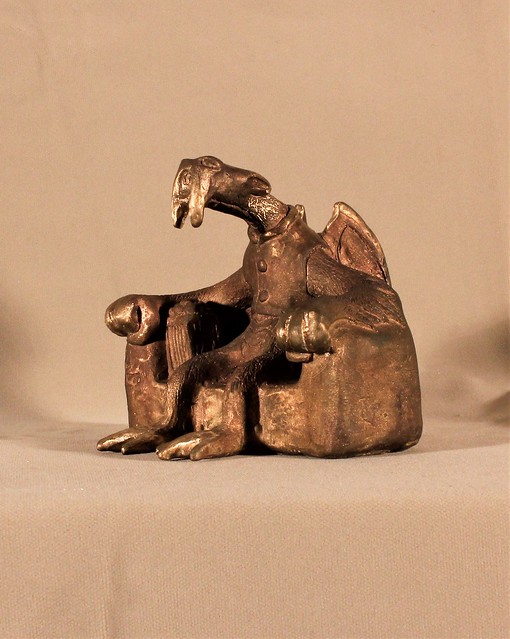